different shades of the Finnish snow ...

There is popular belief that Eskimos have about hundred words for snow. I did small internet research on this subject and found out, that this number is vastly exaggerated.
The Eskimo languages are divided into two main groups (Yupik and Inuit) and numerous dialects.
They include many words of the same origin but in slightly modified versions within dialects, what gives impression of larger number of words than there really are.
According to Wikipedia Saami people (living in far northern parts of Finland, Norway, Sweden and Russia) use about 180 words for snow and ice. Ole Henrik Magga, Professor of Saami languistics from Saami University College in Guovdageaidnu, Norway, wrote interesting article: 'Diversity in Saami terminology for reindeer and snow' (here's link). He described there in English ca.90 Saami words for snow and ice. (and ca.140 relating to reindeers).
As to the Finnish words for snow and ice, someone has already done a big work to translate many of them into English what I have copied below to present complexity of this vocabulary. (here's the link to source I got it from):
'lumi: snow, pyry: snow shower, myräkkä: snowstorm, rae: hail, räntä: sleet, tuisku: snow shower with strong win, laviini: a small avalanche, hyhmä: snow floating atop water, loska: very wet snow; snow, water and mud mixed togethe, sohjo: slush, snow and water mixed together, ahto: pack-ica (broken & refrozen ice, ahtauma: a formation of pack-ice, jää: ice, kide: ice crystal, kohva: gray ice formed from wet snow, paanne: multi-layered ice (typically waves crash on top and freeze), railo: pressure ridge in ice, röpelö: uneven ice, tökkö: ice with frost on top, iljanne: a thin layer of snow atop ice, hanki: a even layer of snow on the ground, esp. if enough for skiin, huurre: rime; granular frost (the white stuff in your freezer), härmä: frost, kinos: snow drift; a loose pile of snow, esp. one formed by wind, kaljama: a thick layer of ice on the ground, lethal in the sprin, kuura: hoarfrost; frozen dew, nietos: a large, hard pile of snow (may be refrozen), nuoska: "snowballable" snow, usually formed when powdery snow melts a bit, polanne: a hard layer of compacted snow, tykky: large chunks of snow, esp. when frozen onto trees, viti: freshly fallen powdery snow, avanto: a hole in ice, jotos: reindeer tracks in snow, latu: a ski trail in snow, rannio: a reindeer path in deep snow.'
Additionally there are numerous words for snow and ice in Finnish dialects.
The most popular words relating to snow not listed above:
lumiukko - snowman
lumihiutale - snowflake
lumisade - snowfall
lumimyrsky -  snowstorm, blizzard
Finnish military uniforms have always included the snow version (lumipuku), nowadays Finnish Defence Forces use snow trousers and jackets. There are also snow outfits for hunters.
Some of my snowy Finnish photos are here and here

Below photo taken from our window. I wonder what would be proper word for that ... 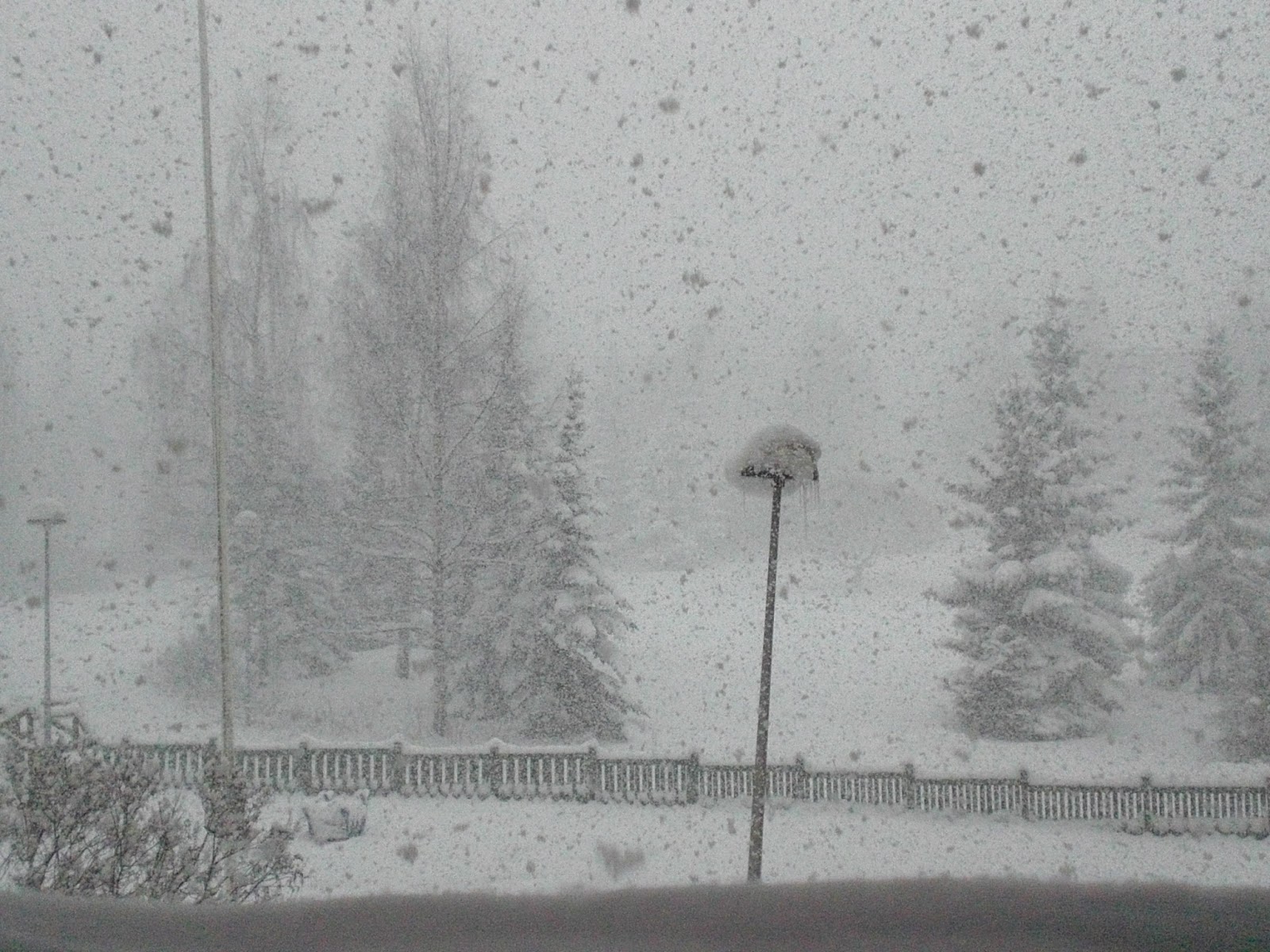 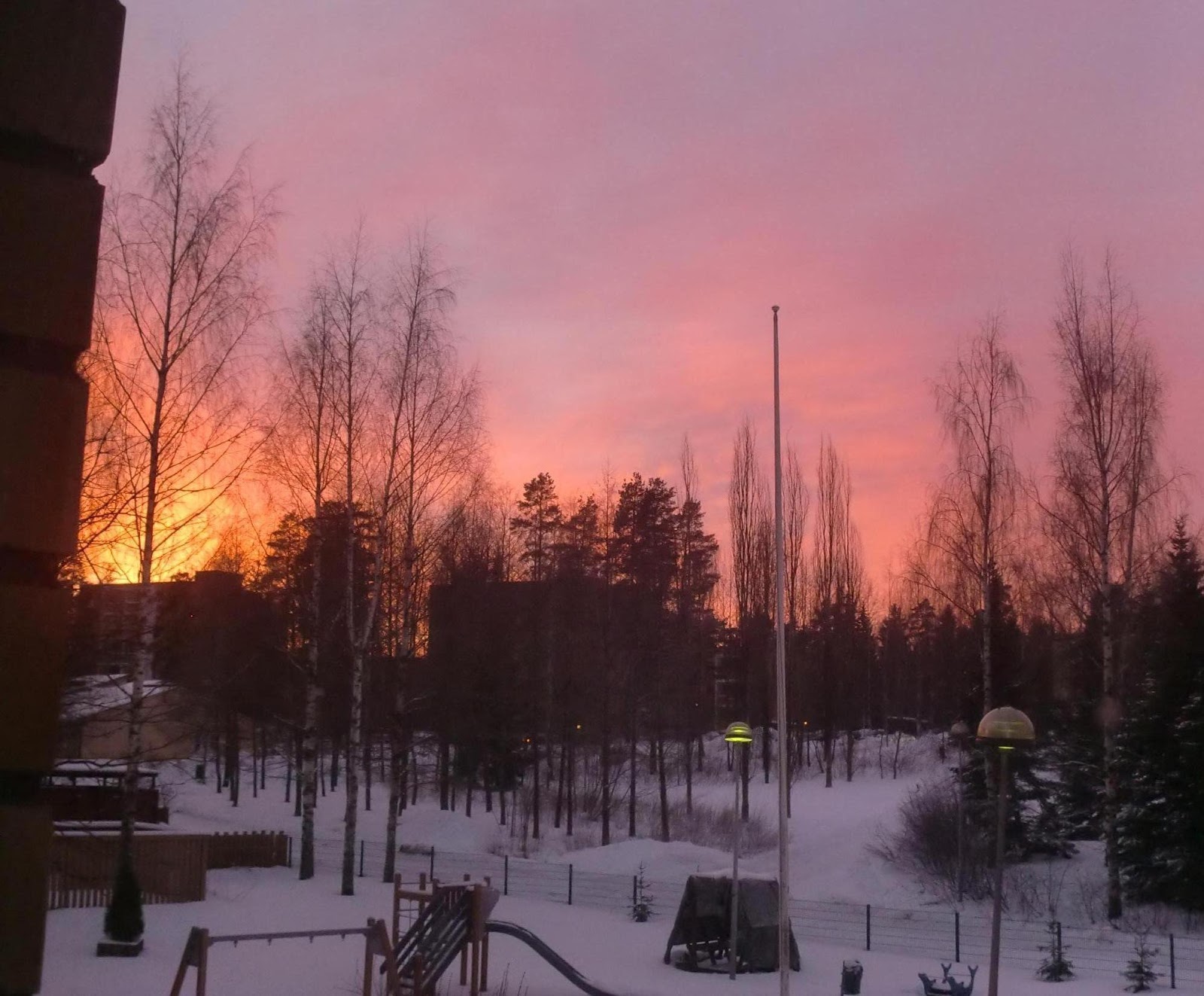 There was very beautiful sunset yesterday. Here's picture taken from our window. Finally some concrete sunset! There was nothing noticable to set down actually for few last weeks, as most of days were grey. The sun has been stubbornly hiden or indiscernible, and today it appeared with the real light.
Exactly during midday I was riding bicycle. About 12 o'clock the sun reaches its highest point in the sky during the natural day, so I was surprised to see my shadow on the snowy road ca. 5m long!
Watching the dark sky at 8 am does not give much energy to start a new day. It is good to realize that anyhow every day becomes longer, so I appreciate this purple sunset and wait for more:-)

the road tunnels in Finland 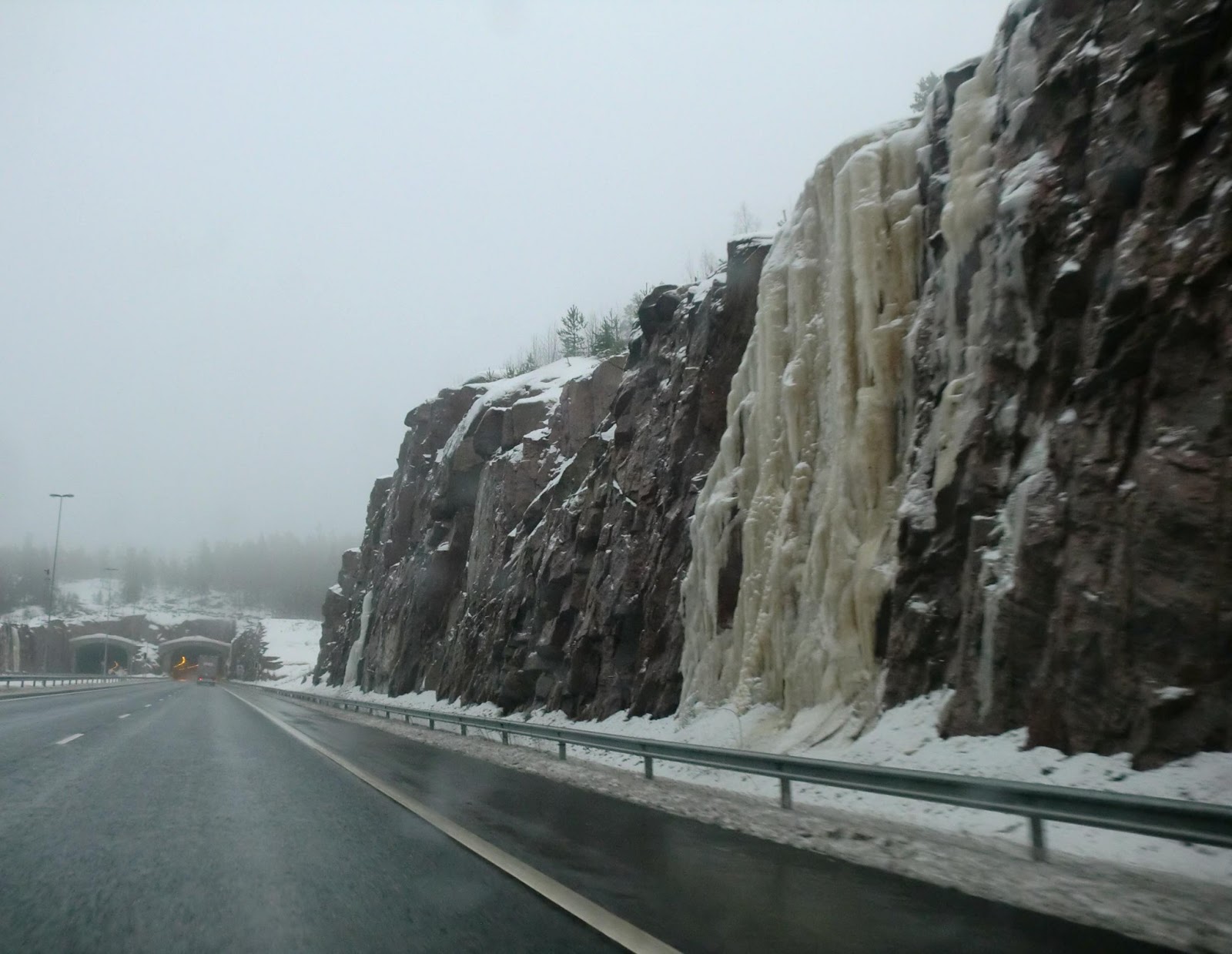 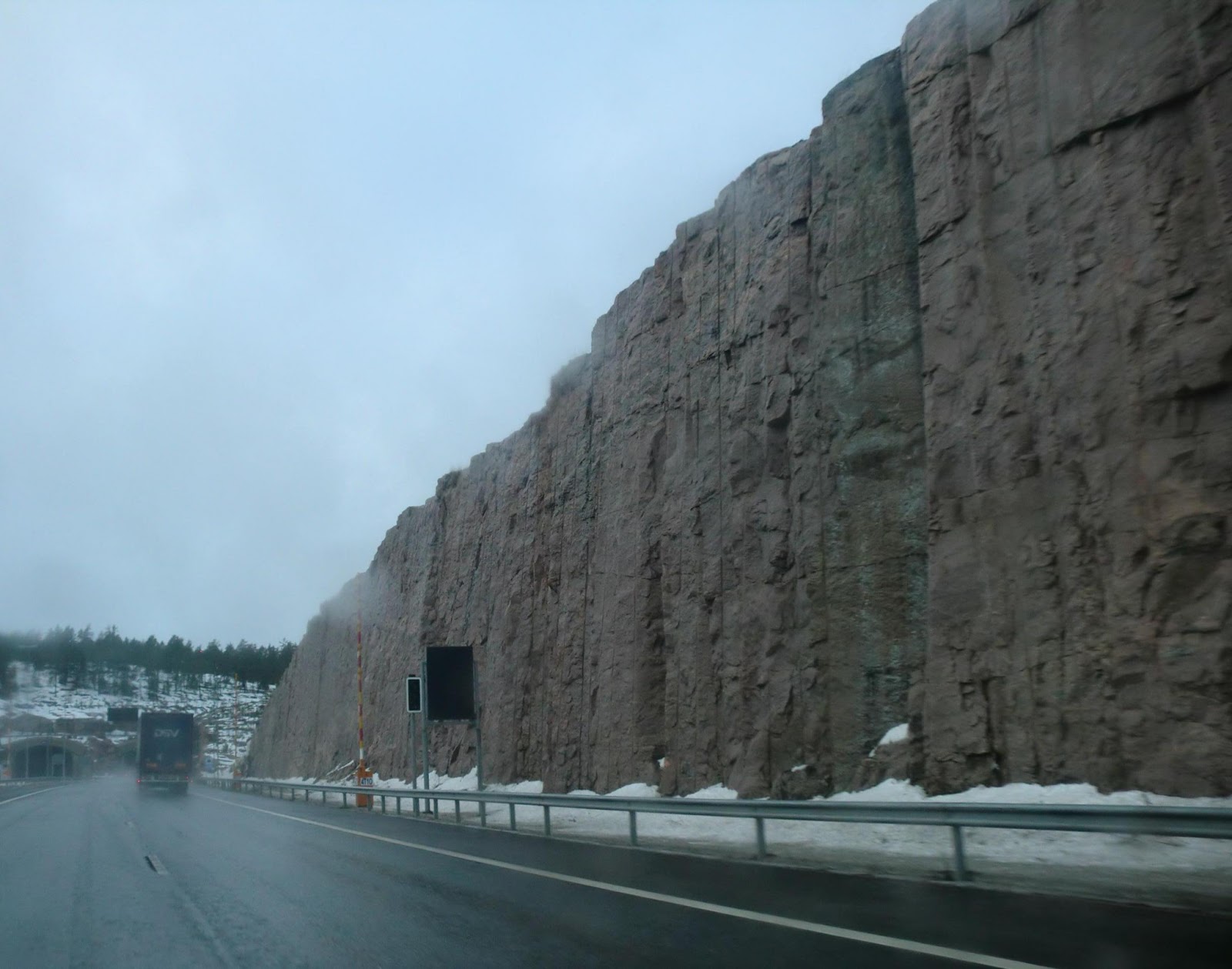 At the beginning of this month we made a trip to Turku.
I have been to Turku only once 10years ago, so I was surprised at the road tunnels we drived through on the Finnish national road 1 (Valtatie 1), (Motorway E18) from Helsinki. There are 7 double-bore road tunnels between Muurla and Lohja (Hepomäki, Lakiamäki, Tervakorpi, Pitkämäki, Orosmäki, Karnainen ja Lehmihaka).
Their combined lenght is 5,2km. The longest one - Karnainen Road Tunnel (Karnaisten tunneli) is 2,3km.
It's the longest road tunnel in Finland.
Tunnels' construction was completed in 2009.
Tunnels are equipped with the emergency exits and SOS-phones.
The road leading often between high rock walls
is nice and impressive.


The below picture comes from http://www.ykkostie.net/tunnelit.html

Here's LINK about other road tunnels in Finland, and below my photos of the tunnels: 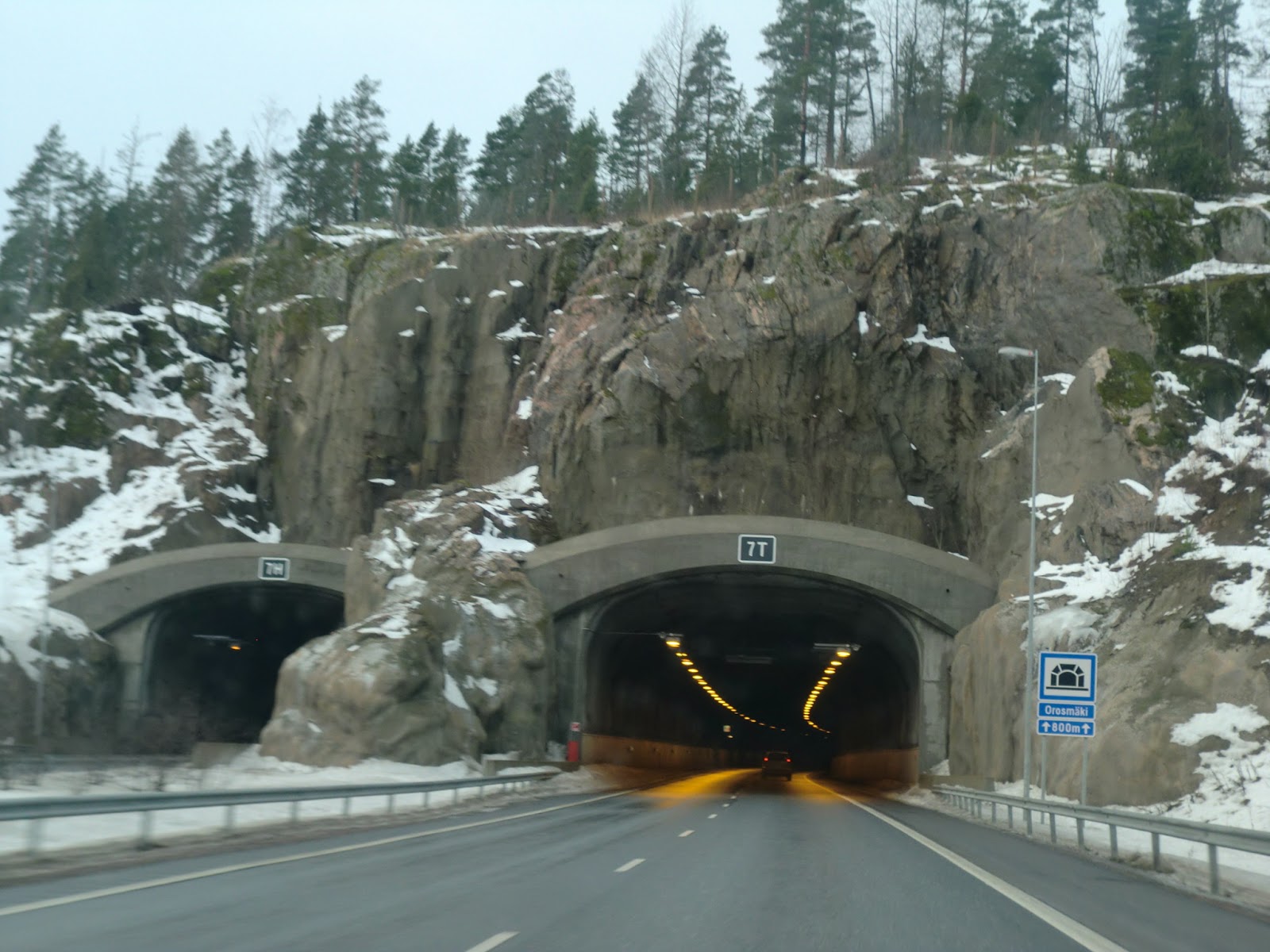 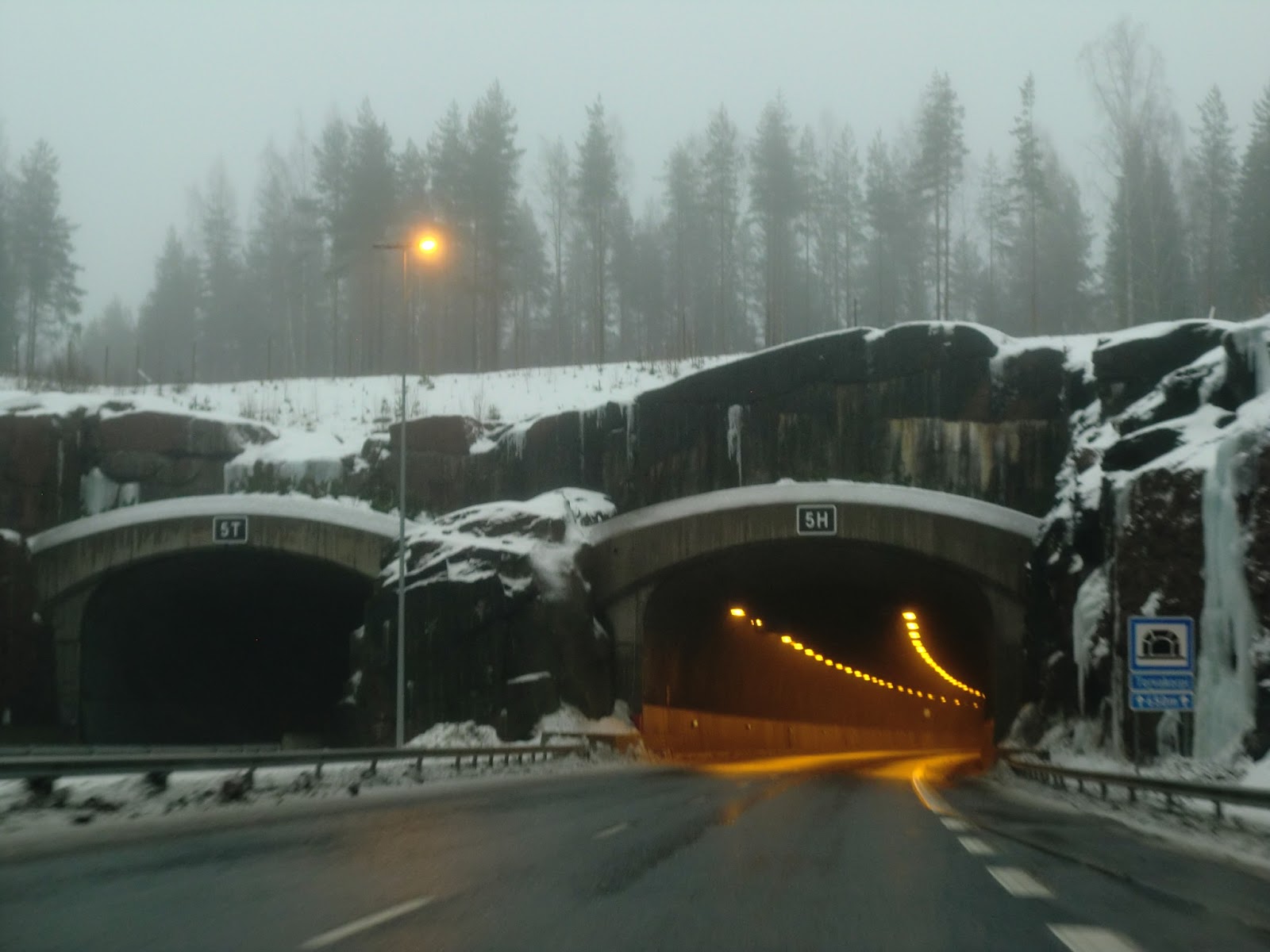 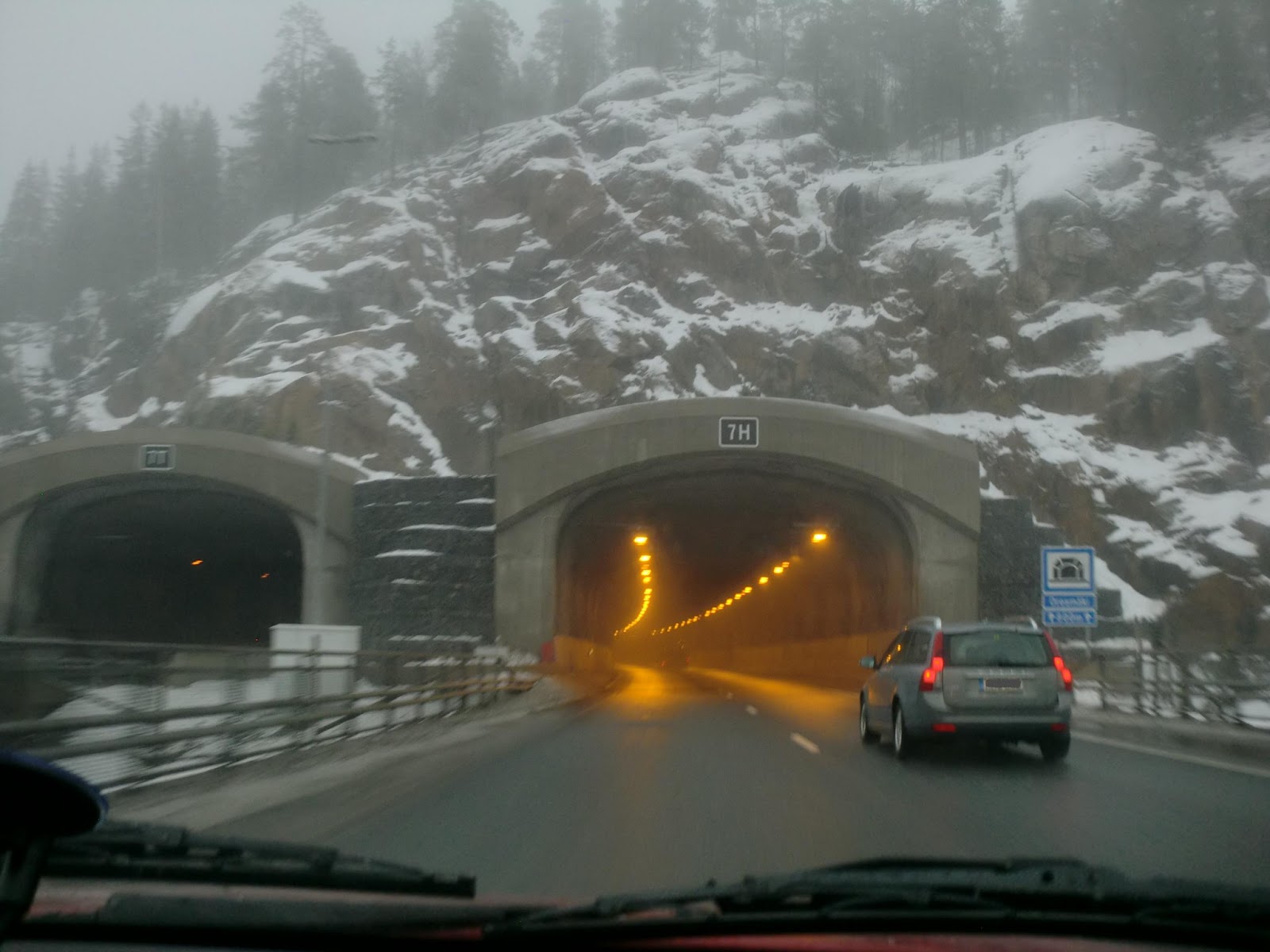 It looks like Finns like the tunnels. Turun Sanomat newspaper from Turku published on 2.12.2012 project of Marco Casagrande (the picture below). The architect has vision of drilling tunnel under centre of Turku. He says "Lowering the road into a tunnel going under the Aura River would free the heart of Turku from cars for good. And Turku is worth it." (here's link to his blog, this post is in English). Reading comments on the internet I see that this project has many enthusiasts.
Times shows if this dream comes true ... 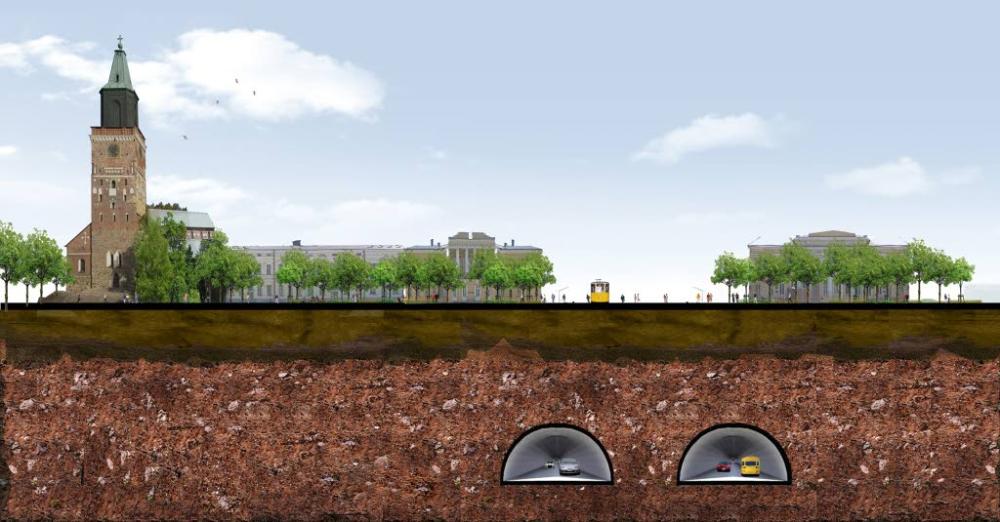 After spending Christmas at home we left to Naantali and Turku for few days for a change.
The weather seems to stay gloomy forever. The amount of coffee I drink increases every day
and the winter will last here at least until April.
I find small consolation in fact, that days are becoming longer since Christmas.
Naantali is under 20000 of population city 15km from Turku. Small beautiful city most known for the Moomin World and Naantali Spa Hotel. The Moomin World is closed during winter. 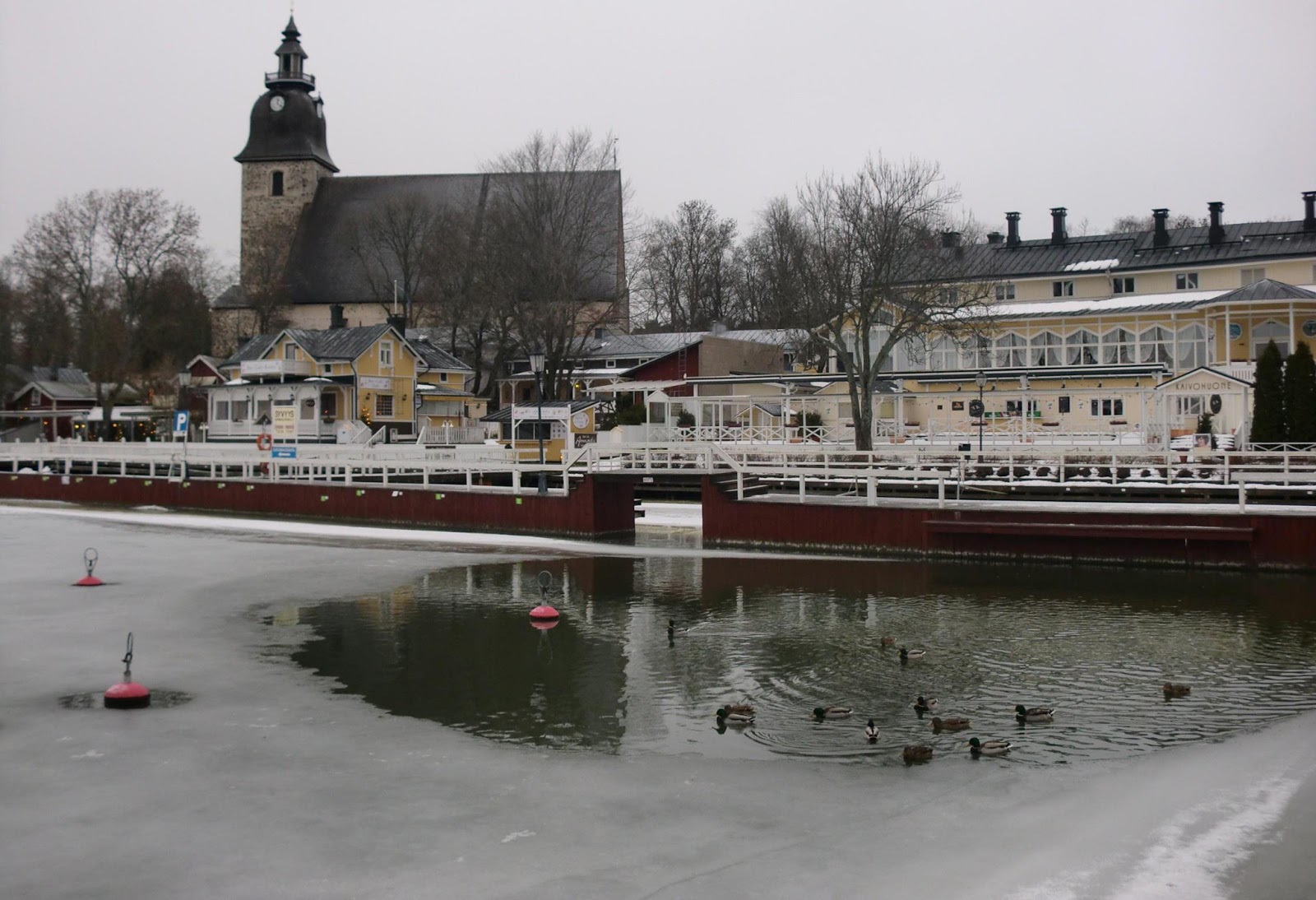 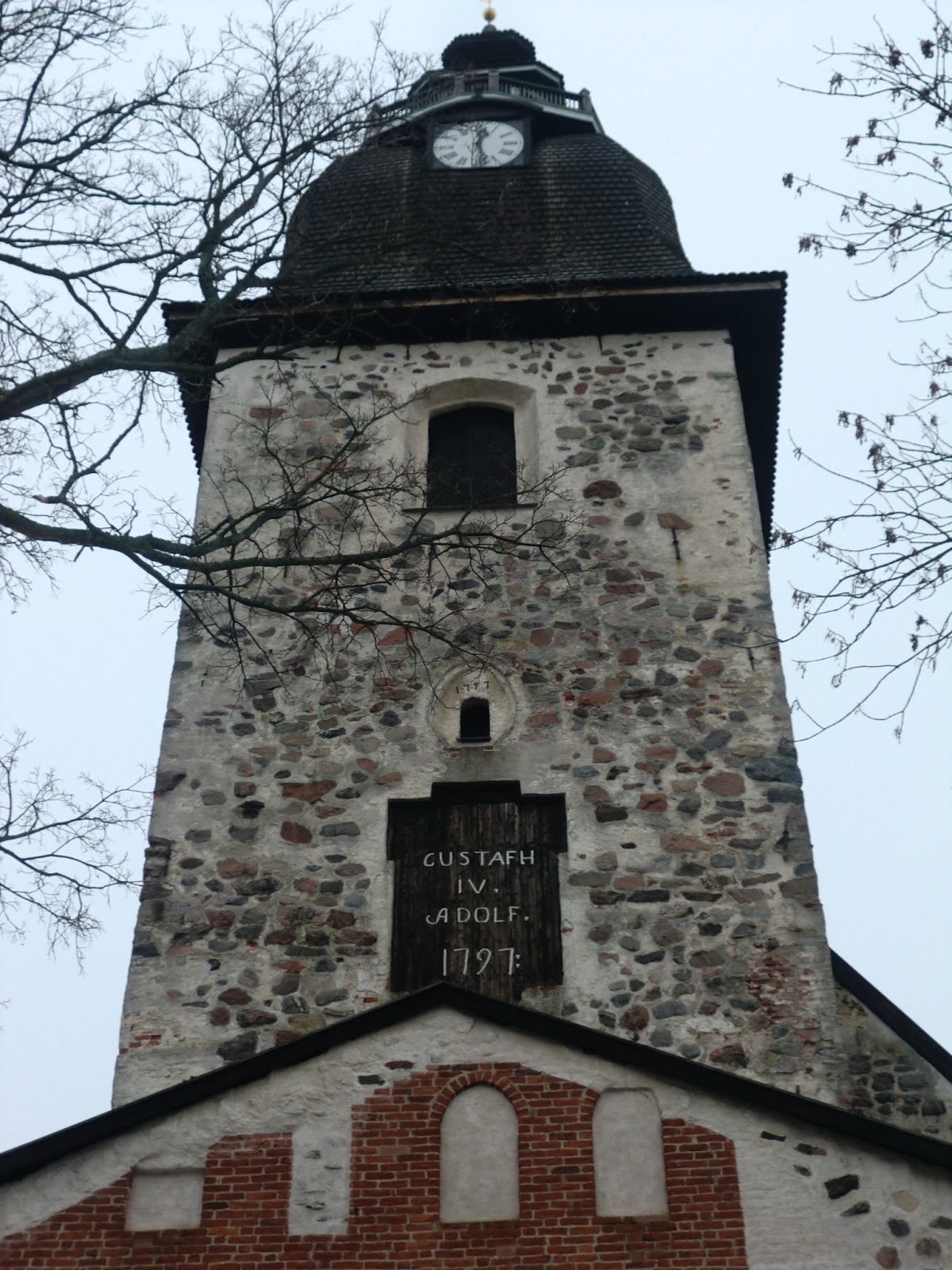 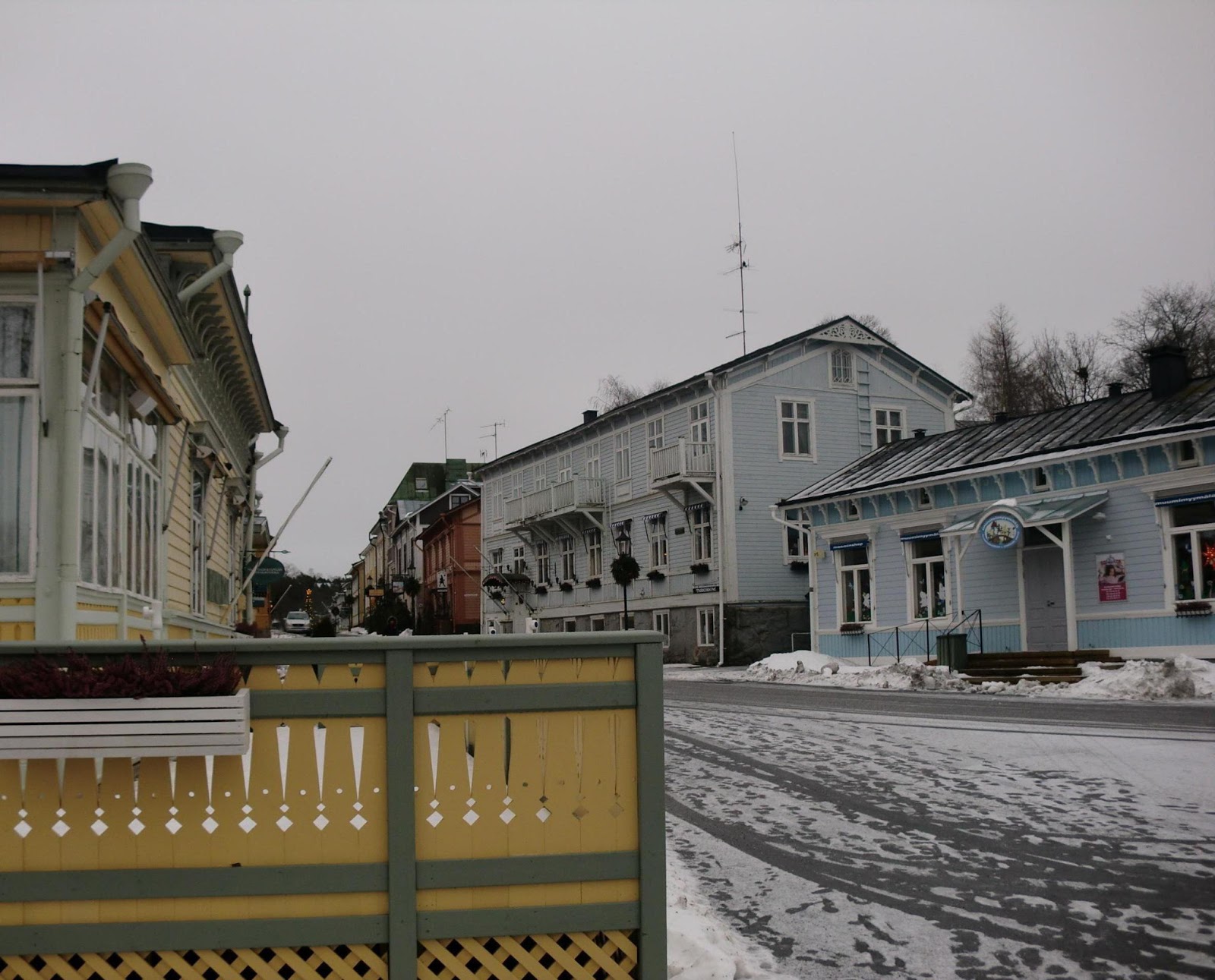 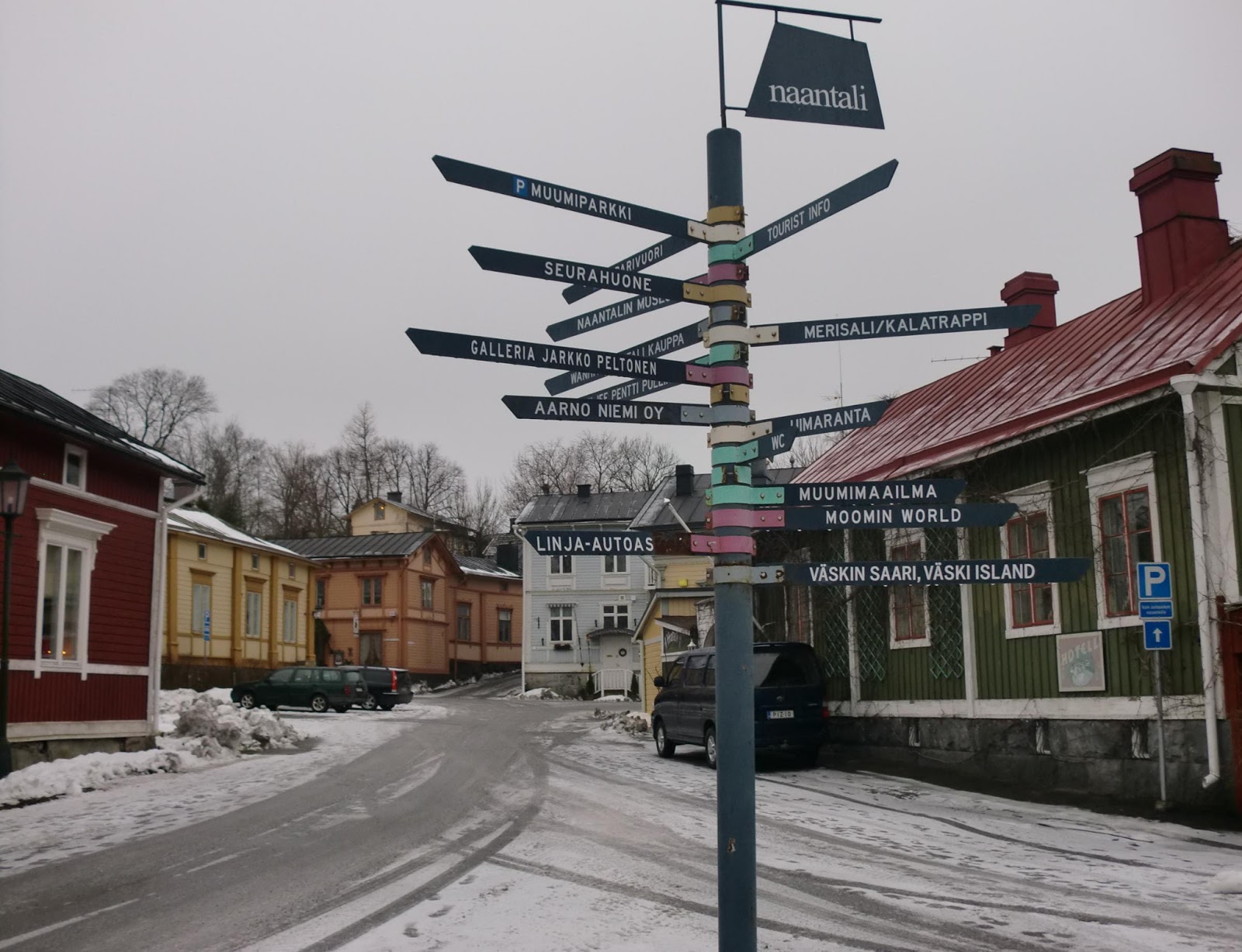 We visited Turku Cathedral, Finland's national shrine. It was built already in the late XIII century, initially as a wooden church, 100years later rebuilt with stone. The cathedral is tremendous and really impressive. 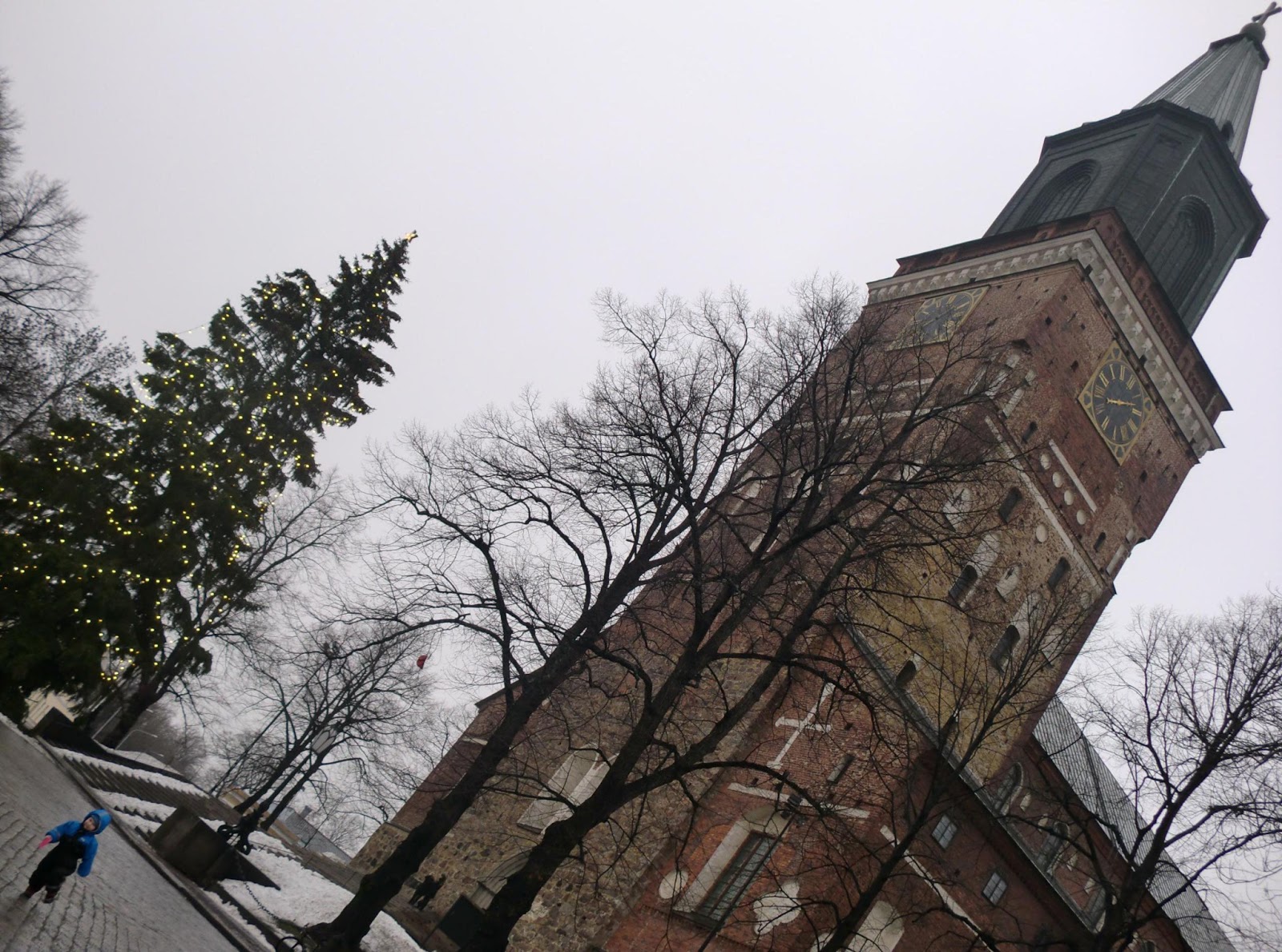 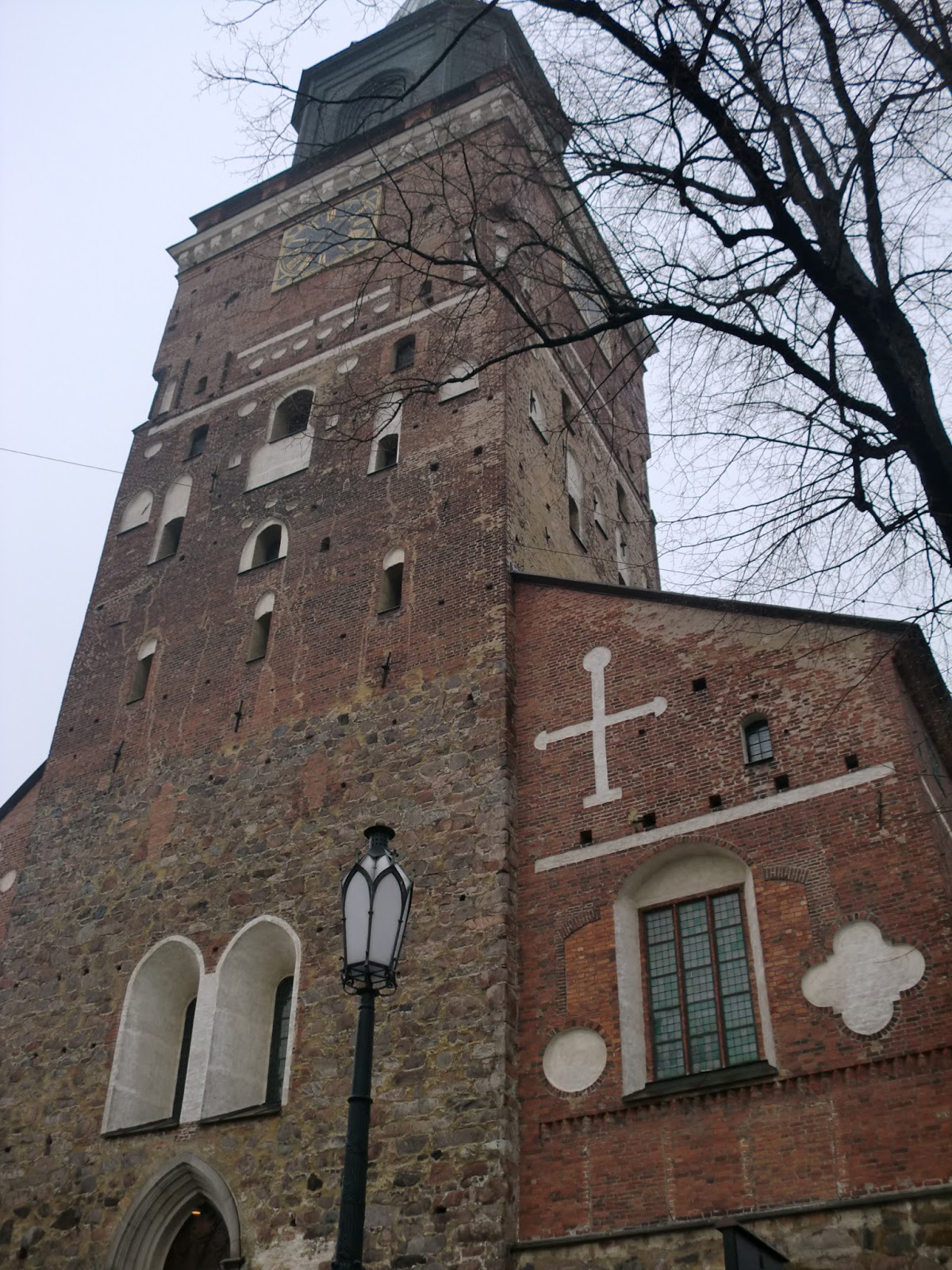 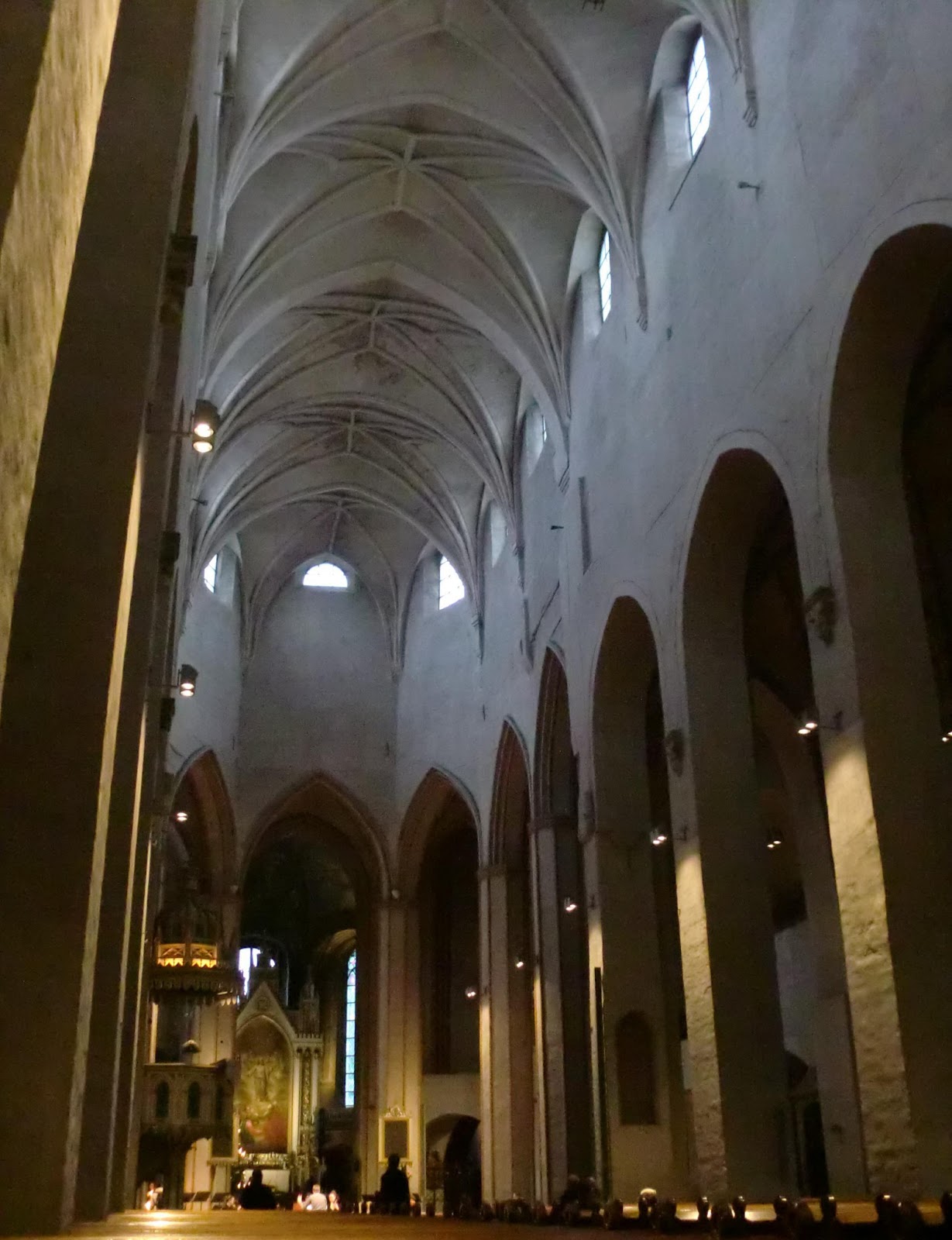 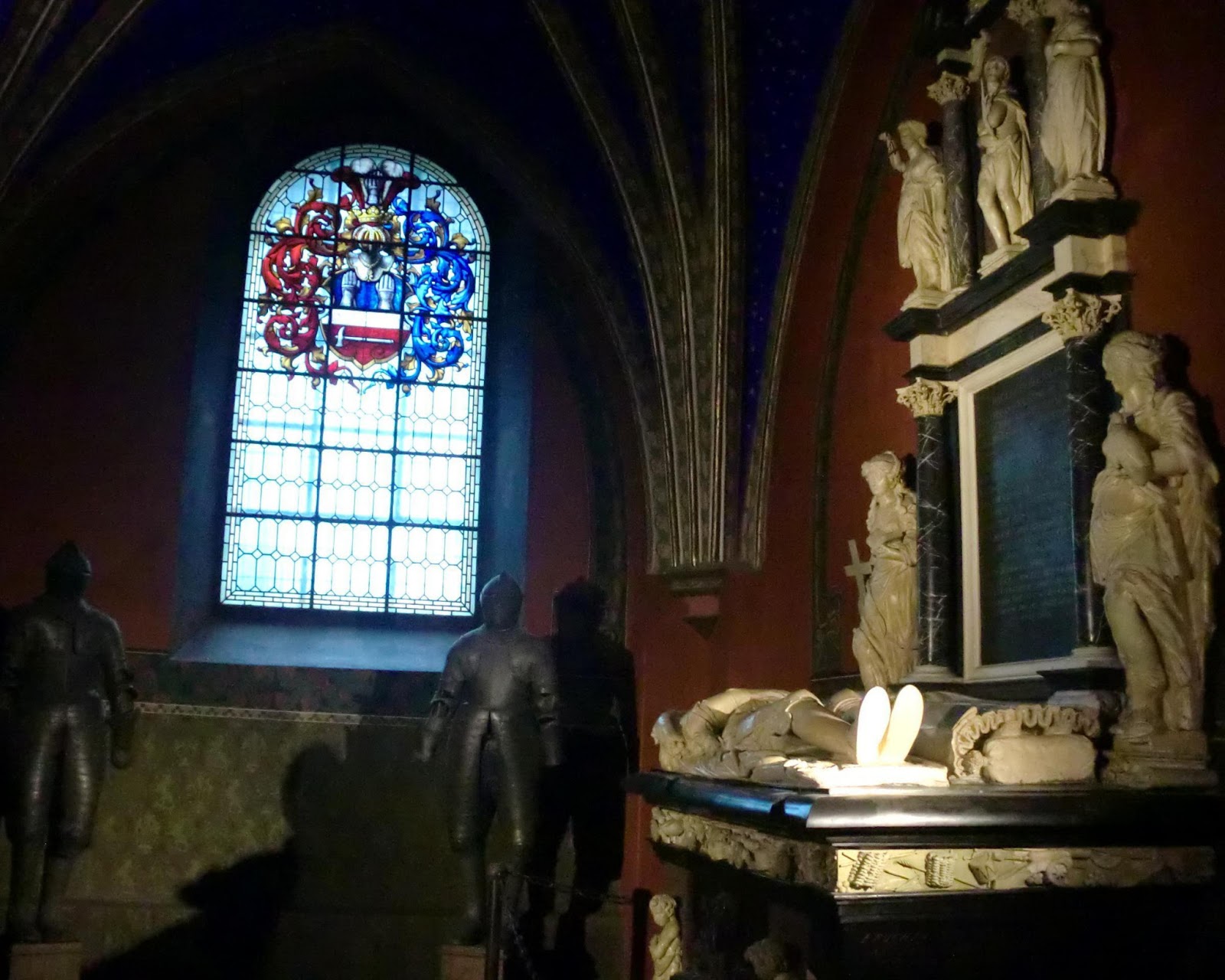 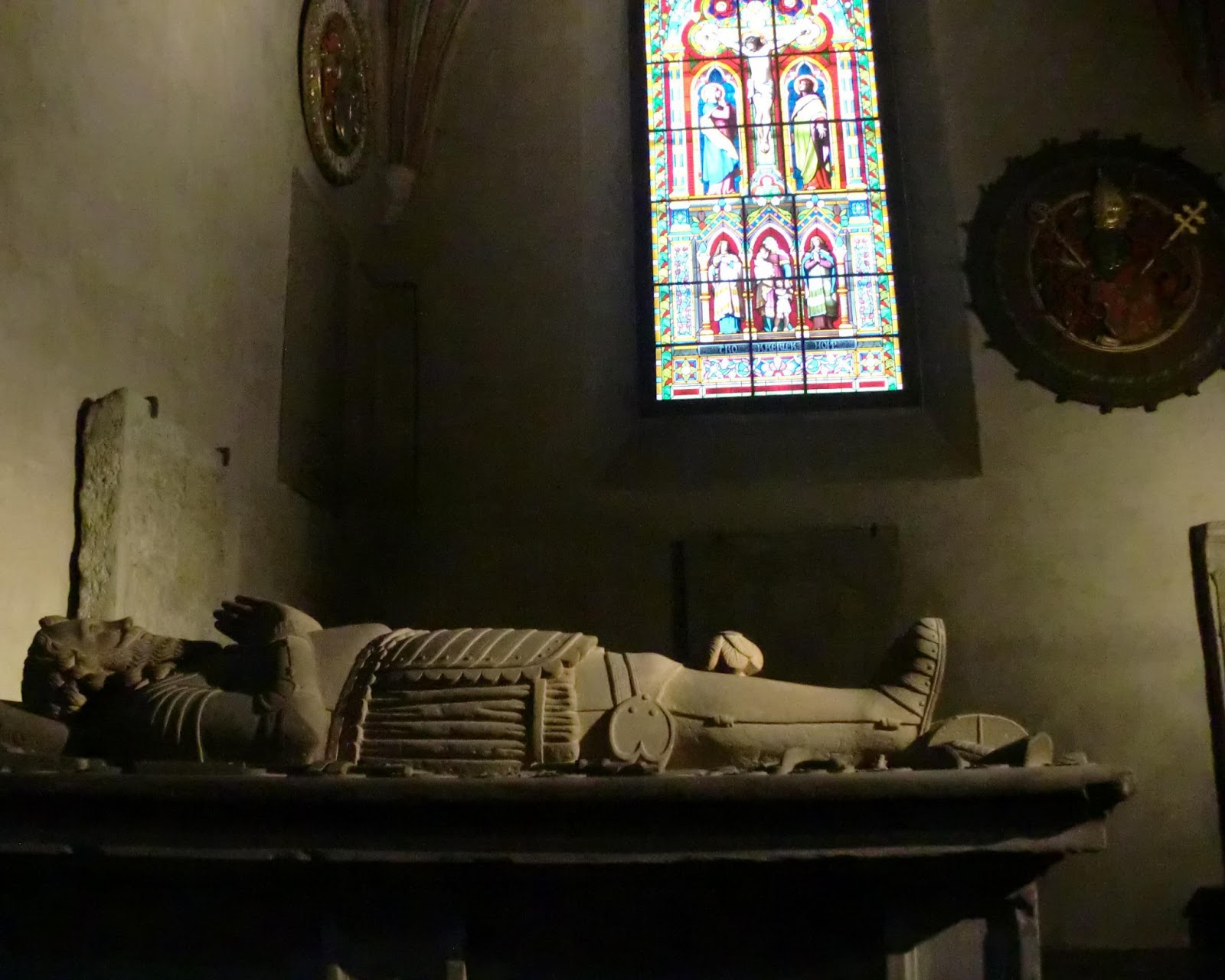